IN THE NEWS… New Scale Robotics was featured in the August 21, 2020 issue of the Rochester Business Journal.

The article discusses how the company grew as a natural offshoot of New Scale Technologies, a company with a long history and deep expertise in creating precision motion systems for industrial, scientific and commercial instruments. It explains why New Scale considers its robotics division to be a strategic growth opportunity.

It’s an industry that has the potential to go gangbusters. Market analysts suggest that the global collaborative robot market could grow from roughly $981 million in 2020 to $8 billion by 2026, with a compound annual growth rate of more than 40 percent over the next six years.

“It used to be that automating a manufacturing floor would carry a minimum investment of $1 million. With new technology and the use of collaborative robotics, business owners now can invest one-tenth that amount,” Henderson said. “What that means is this [Q-Span System] workstation costs about as much as hiring a person for a year… So you’re looking at payback times that are less than a year.”

Add to that increased productivity and flexibility and it’s a win/win, particularly for small and medium sized enterprises that previously were left out in the cold because of the cost constraints of automation equipment. 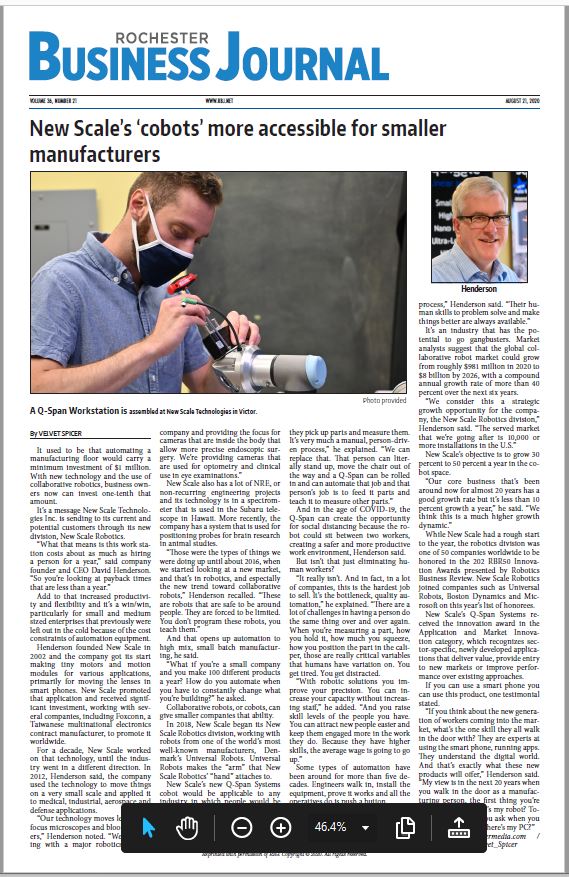