At New Scale Robotics, we love meeting with manufacturers who have adopted collaborative robots in production. These engineers and technicians understand the benefits of cobot automation.

When we introduce the concept of automating gauging, they are quick to see the opportunity to extend the benefits of automation to QC inspection.

“…maybe my favorite product introduction of the show (because it is so practical) was displayed by New Scale Robotics. The company offers cobot grippers with integrated caliper gaging — meaning the robot can gage a part each time it grabs a part. In one machine shop that uses this system to tend an automated lathe, the company says the robot confirms part OD as a consequence of unloading each part. If the diameter ever trends out of spec, the robot simply raises its arm to signal to the shop that attention is needed.”

Zelinski noted that, while there were plenty of robots on display in the production-focused South building at IMTS back in 2018, a major difference this year was the emphasis on automation in the East and West buildings for areas such as tooling, workholding and inspection.

Of course, calipers are not the only tool used in a machine shop to measure parts. The Q-Span Workstation can incorporate a wide range of additional tools to complement the gripper/caliper and gauge higher-tolerance part features. These tools include bore gages, LVDT/drop gages, height gages, thread gages, and robotic micrometers. 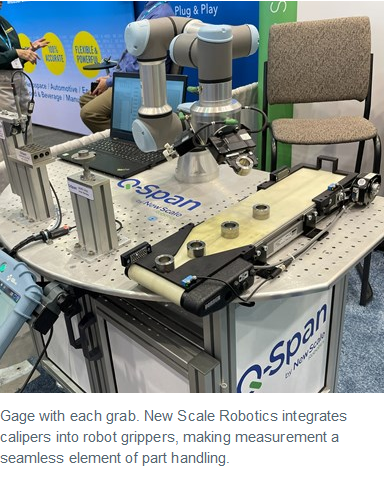 Photo and caption from mmsonline.com