ASQ Rochester Meeting – What We Learned

I have given a lot of demonstrations and presentations over the past year. One of the best parts is what I learn from the people I interact with.

Take the Rochester, NY chapter of ASQ (American Society for Quality), for example. This is a group of people who are truly passionate about quality. I recently had the pleasure of spending an hour with this group, discussing collaborative robots and gauging.

What I shared about robots for automated gauging and testing

During the course of the evening, I shared:

– How collaborative robots make automation accessible, even for the smallest manufacturing companies

– How to get started with automation in QC (Hint: Incrementally)

– How to automate existing manual gauges

I created a handout of the presentation that I am happy to share with you:

Get the presentation handout (PDF)

What I learned about people

The Q&A session after the presentation reinforced a few things I have learned about people.

1. People want to know how they can trust a robot not to hurt them.

After watching the demos for a while, one participant wanted to know why there were no enclosures or visible safety features.

We talked about the safety settings within the robot, namely force and speed controls. You can set the maximum speed that the robot joints can move, and have it detect forces when it collides with something. For applications such as handling delicate parts, you want as little contact force as possible to stop the robot.

In demonstrations, I often invite visitors to stand where the moving robot will collide with them. It may seem weird to be “beating up” people who want to buy our system! But it’s a memorable way to show that the robot will harmlessly stop upon colliding with a human, thanks to its internal safety settings.

Of course, even with collaborative robots, you need to do a safety assessment for your application. Usually it’s common sense, for example, if there’s something sharp, put it in an enclosure. But the majority of the applications with these types of robots are unguarded.

A listener asked how the robots have been received by the employees on the shop floor and whether they see the “technology invasion” as a threat.

It’s a great question. The cool thing with collaborate robots is that you don’t have to be a programmer, and you can overcome a lot of initial resistance by just having everyone use them. Put the robot in the hands of your skeptics on the shop floor, and have them start doing things with it.

They are usually pretty quick to find ways they can use the robot to improve their own jobs. Universal Robots has tons of case studies where hesitant employees quickly became converts.

3. People want to know how to feed a robot.

People asked how to get the parts to the system for the robot to pick up. This is one of the biggest challenges with automation projects for quality inspection.

Robots like to have a known location where they can pick a part. So a single part at the end of the conveyor, that’s very easy. If you load tray, you can program an array for the robot to pick parts from the tray. There are vision-based systems that will provide coordinates for a part location in a vibrating table.

The most useful approach will depend on where the system is deployed and how the parts usually get to the inspectors. If they’re in a bin to begin with, the vision system with vibrating table might be a great use case. One participant described designing a rail system in the shape of the part so that the part automatically orients itself, which is another great solution.

There are definitely costs in automating feeding systems. I recommend starting simple, such as with trays, and once you’re happy with the gauging process you can move on to automatic part feeding.

Stephan Friedrich is Marketing Manager for New Scale Robotics. Connect on Linked In. 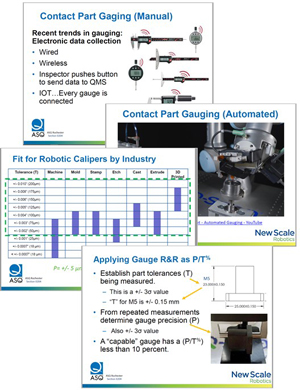 Download the handout from Stefan’s presentation at the ASQ Rochester Chapter meeting. 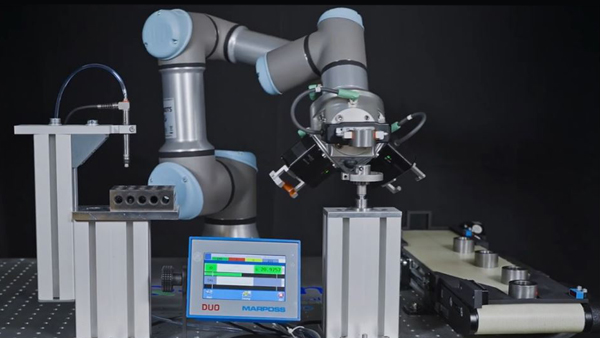 Get Q-Span Automated Gauging System product information
Contact us for a demonstration!

ASQ describes itself as: “A global community of people dedicated to quality, who share the ideas and tools that make our world work better… quality champions who are transforming the world’s corporations, organizations and communities to meet tomorrow’s critical challenges.”

The ASQ Rochester Chapter definitely embodies this ideal and it is a pleasure working with them.

Would you like New Scale Robotics to present automated gauging with cobots at your quality-based organization? Contact us!