How many robots does it take to screw in a light bulb? Well, none, because that’s not really how we use our robots…but we did spark some light bulb moments at Automate 2022.

At Automate 2022, we talked to a lot of people who are chasing “lights-out” manufacturing. We heard about their various work-arounds for the steps in the production process that just cannot be automated.

Or so they thought.

Until they saw our automating gauging system at work – and had that “light bulb moment.” You know, the moment when it seems that a light bulb appears above your head and you say “aha!”

We heard: “You just gave me an idea!” and: “You might just have exactly what I need.”

Everyone who had a light bulb moment had three things in common:

Machine tending is a natural first step. Whether that’s loading/unloading a lathe, mill, press brake, or CNC, it’s one of production’s biggest time sinks. So automating it does save time.

For some, that means running an extra shift. For others, it is as simple as “turning off the lights” on a particular machine so it can run totally unattended.

Imagine a CNC machine with automated machine tending, running a cycle time of one minute per part with one hour of unattended machine time. An hour of “lights-out” manufacturing produces 60 parts with almost no overhead. Beautiful, right?

Now imagine that 30 parts into the run, the outer diameter (OD) goes out of spec. The CNC carries on for the rest of the hour, producing 30 more parts: All of them garbage, needing to be scrapped or reworked. The benefit of low overhead just took a pretty big hit.

But wait, QC was supposed to measure one of every ten parts, right?

Realistically, manufacturing and QC are never going to be able to efficiently coordinate a QC person to walk over to the CNC several times during the one-hour “lights-out” run, when staff is short and there is so much else is going on. They’ll measure one in ten, but probably only at the end of the run. And does production really have time to wait for the QC check before starting the next run?

What if you could do measurement inspection on every part coming off that machine, and use a robot to do it unattended?

You could catch that first bad part, and stop the run. Immediately alert a machinist to come change the machine tool, adjust an offset, fix any other issues, and restart the program. Voila! Only one bad part, not 30!

And the beautiful thing is that you had no extra spending on overhead to do it – less spending, in fact, since you don’t need the machinist or QC team’s time unless there is a problem.

Now let’s take it even further.

Imagine that your robot is not only automatically inspecting every part as it comes off the CNC machine – it’s feeding the measurement data into your AutoComp software (Caron Engineering) and then to your CNC control. And your CNC is automatically adjusting offsets, in real time, to compensate for tool wear.

You’re no longer playing with goalposts with your QC checks, and only getting notified when you hit an upper or lower tolerance limit. Instead, your CNC machine is compensating for drift based on real time data, keeping you closer to nominal.

And it gets better. With the Q-Span Gauging System you don’t even have to worry about the data collection and integration. The system includes easy-to-use software to control the UR collaborative robot – both the gripper for part handling and the robotic calipers for gauging – and to send all the data through the robot to a standard output.

Congratulations, you’ve gone all the way to lights-out CNC machining! 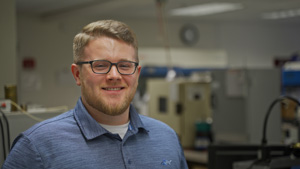 Stefan Friedrich has been helping manufacturers deploy and use precision micro-mechatronic products and collaborative robots since 2016. He is currently marketing manager for New Scale Robotics and New Scale Technologies.