If you are part of the robotics industry, you are keenly aware of the growing phenomenon of collaborative robotics. In an industry that has in the past evolved slowly, cobots are getting a lot of attention for the pace they’re being adopted.

A collaborative robot is a robot designed and built to work with humans. It is simple. It doesn’t have pinch points. It features integrated sensors and software that makes the robot move slowly. It automatically stops or slows if it bumps into a worker, into tooling or another robot.

Collaborative robots are low cost compared to traditional industrial robots, and can be programmed without any robot programming experience. The appification of smart phones has really hit robotics: simple, easy-to-use programming interfaces help to program these robots so that a child can literally program them, assuming they have an iPhone, iPad or an Android device.

One thing that makes the collaborative robot appealing is that you no longer need that complex (and expensive) layer of integration called an integrator. Another big bonus is that elaborate safety guarding isn’t required, because collaborative robots are inherently safe.

(It’s true that you do need a safety audit and risk assessment with every new piece of automation, because it’s the process that has to be qualified as safe. The end-of-arm tool (EOAT) also has to be safe. And if the part in the EOAT is sharp, for example, this must be vetted in the safety audit.)

A look at the cobot market evolution

The leader in collaborative robotics is Universal Robots (UR) of Odense, Denmark. UR revolutionized the industry by identifying the overwhelming need to educate, sell, install and service cobots going into factories around the world, for all kinds of applications.

Because they just couldn’t hire enough sales and technical people, UR built their business model using distributors: automation component distribution companies. An interesting by-product of this distribution model is that the robot industry has more people selling more robots than ever before in its 60 year history.

Just when you have started disrupting an industry, secured the best distribution partners, created industry-leading online training systems, and started an industry leading accessory “app store” (UR+), you would think all is well. Nope. Everyone wants to eat your lunch.

Although most of them have been late to get their feet wet with collaborative robots, traditional industrial robot companies like ABB, KUKA, EPSON, Yaskawa Motoman and FANUC have all introduced a collaborative robot model. Likely they did not want to give their competition a chance to appear in a factory beside their traditional orange, blue or yellow robots.

“The Collaborative Robot Market Will Exceed US$11 Billion by 2030, Representing 29% of the Total Industrial Robot Market”
– ABI Research

And now comes the second wave of cobot manufacturers, from everywhere: Japan, China, Korea, USA and even Canada. The new kids on the block include names like Techman, Doosan, Carbon, MABI, Kinova, Productive, and Aubo to name just a few of the new breed of innovative competitors.

The big challenges in manufacturing continue. The USA has a 3.6% and lower unemployment rate and baby boomers are retiring at the rate of 10,000 people per day. We have manufacturing trade challenges with Mexico and China, and these factors should be driving re-shoring back to North America. One would think that collaborative robots and industrial robots should be flying off the shelves.

So why the slow-down in robot sales?

We will see what the future will bring with collaborative robots and more niche applications beyond the low-hanging fruit of machine loading and unloading, and material handling.

One such application is automating measurement of small parts for quality assurance. This process is currently done by a technician with a digital caliper, manually measuring features on a part and entering the numbers into a PC.

A cobot equipped with precision grippers and digital calipers can pick small parts and measure multiple dimensions on the part. It can use the result to make in-process decisions, such as sorting parts into pass and fail bins. It can automatically log all the data electronically to a PC, where it can be analyzed later or used to alert operators to a potential process drift.

Q-Span System robotic caliper measurements are more repeatable than manual caliper measurements. The robot doesn’t make data entry errors when logging the data. It doesn’t get tired, bored, or suffer from repetitive stress injuries. And it can work alongside a human operator who is freed to do higher-value and more rewarding work. 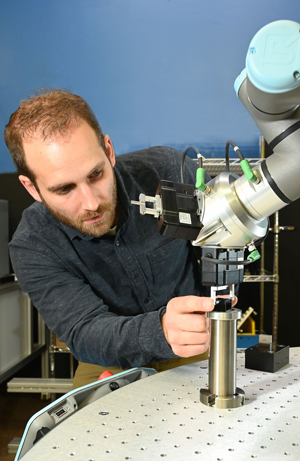 Collaborative robots, working alongside human operators, are more flexible and less expensive to implement than hard-tooled industrial robots. As such, they are proliferating in high-mix, small-batch manufacturing environments.