Seven things you should know about New Scale Robotics

Mechatronics means integrating a motor, mechanical motion components, sensors, drive electronics, microprocessors and firmware into a single system, eliminating external drive electronics and optimizing system performance. Micro-mechatronic systems do that in objects that will fit on a fingertip. New Scale founder and CEO David Henderson is an inventor and expert in mechatronics and micro-mechatronics. He’s assembled a team with similar strengths and built a company on that expertise, together amassing 20 patents (and counting) for micro-mechatronic technology and applications.

The end-of-arm tools (EOAT) on our Q-Span® Workstations are micro-mechatronic masterpieces. Because the robotic calipers and grippers are so small and light weight, three of them can be mounted on the smallest collaborative robot arm. This increases production efficiency by performing more tasks with fewer large moves of the robot arm. Furthermore, the embedded sensors in the gripper allow it to feed back precise position information to the robot – enabling invention of the world’s first robotic calipers.

4. We solved the problem of human variability in QC measurement

Human variability has plagued quality assurance (QA) and quality control (QC) since standard measurements were invented in the 18th century. Two people measuring the same object with the same micrometer or calipers can record different readings based on how much pressure they use, how they are holding the measuring device, where they are measuring and at what orientation, whether they are fatigued or distracted, and how much training and experience they have.

5. We solved the “fat fingers” problem

A surprising number of sophisticated manufacturers still record QC measurement data manually – sometimes even by writing it down in logs. Before that data can be useful for analysis and process improvement, it has to be digitized. Handwriting can be notoriously hard to read. Even if it’s perfectly legible, the “fat fingers” problem of hitting the wrong key during data entry remains. By using a robot to make the measurements, and then automatically send the data to a PC, we eliminate these issues.

Traditional industrial robots are big, expensive systems that require significant factory floor space and safety cages. Once installed, they do one thing and one thing only – it’s a major undertaking to change the robot and make it do something else. This is fine for high volume production that runs essentially unchanged for years. But high-mix, small-batch manufacturers change over their production runs often, even daily, and need automation solutions that are more agile and affordable. Collaborative robots fit the bill: small, designed to work safely beside humans, and easily moved or reconfigured as production needs change. The Q-Span Workstation Kit uses a UR3e collaborative robot from Universal Robots.

If an employee can use smart phone apps, they can use a collaborative robot and Q-Span Workstation. The system can be changed over to perform a new task in under an hour by swapping out the gripper/caliper fingers and the pick and sort trays, then calling up the new program and running it on the teach pendant like a smart phone app. Think of the up-training and advancement opportunities that can be created for your employees.

Want to learn more about New Scale Robotics? Contact us at NSRsales@newscalerobotics.com or call 1-585-924-4450. 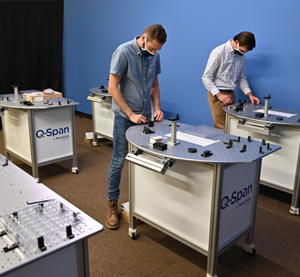 New Scale Robotics produces its Q-Span Workstations based on its expertise in micro-mechatronics: the science of combining electronics and mechanical engineering to produce optimized micro motion systems.